Please note all attendees must be fully vaccinated against Covid-19 prior to arriving on our campus. See our COVID-19 Prevention Protocols. During this adults-only learning experience in the North Georgia mountains, participants will enjoy three incredible days of learning and transformative programming in partnership with the MJCCA’s Lisa F. Brill Institute for Jewish Learning, Atlanta’s largest Jewish education program for adults and the Florence Melton School of Adult Jewish Learning (Melton), the largest pluralistic adult Jewish education network in the world and sets the standard for high-quality, text-based, interactive Jewish study.

We have four hotels on our 185-acre campus.

All hotel rooms have a private bathroom, a table and two chairs, heating and air conditioning, complimentary toiletries and bed and bath linens. 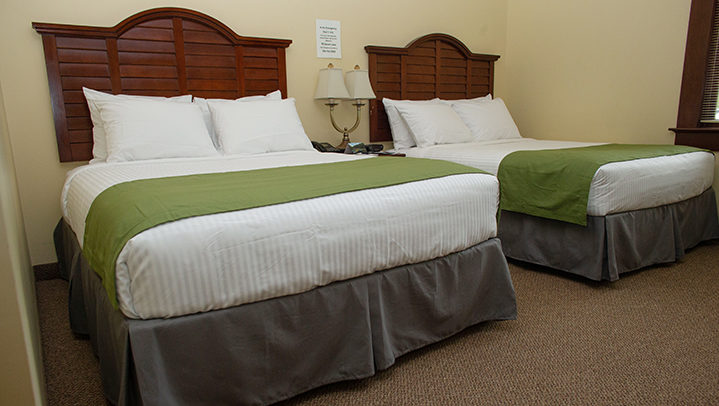 Marcus Lodge (ML) and Mountainside Hotel (MSH) hotels are located up a steep hill with stairs, boardwalk and walking paths to the main areas of the campus. These standard hotel rooms each have a bathtub shower. Some connecting rooms are available.

The Welcome Center (WC) and Lakeside Hotel (LH) hotel rooms are larger with either two queen beds or one king bed and a deluxe tub. Some connecting rooms are available.

The Welcome Center is an easy, flat walk to the Levine Center where meals are served and most of the action takes place. The Lakeside Hotel is up a steep hill close to the lake and not far from the Levine Center. Our most luxurious accommodations! Beautiful studio-style houses with a kitchenette, private patio, bathroom with walk-in shower, a king-sized bed and a sleeper sofa. Four cottages are available. These beautiful cottages are located on the mountainside of our campus off right near the boardwalk with both stair and ramp access to the main areas of the campus.

All-inclusive rates are per person and include comfortable hotel or cottage accommodations, delicious kosher meals, snacks and beverages, and all activities.

A $50 non-refundable deposit for each adult will be processed when the registration application is submitted. Payment is due in full 1 month before the program start date (February 13, 2022).

Cancellation Policy: Cancellations made by February 27th are eligible for a 50% refund. No refunds will be made after February 28th. This policy includes cancellation due to quarantine after exposure or the result of a positive COVID test. Therefore, we strongly encourage Trip Protection Insurance. Talya Gorsetman is the Director of The Lisa F Brill Institute for Jewish Learning/Melton School at the MJCCA. Born and raised in Manhattan, she received a Jewish day school education. Talya attended Midreshet Lindenbaum, a post-high school program in Israel committed to teaching young women Bible, Talmud and Jewish Law. Back in the United States, she completed her secular studies at Stern College for Women, Yeshiva University, where she earned a Bachelor of Arts in Jewish studies. She later returned to Israel to complete the post-college women’s Kollel program at Midreshet Lindenbaum. Judy Stolovitz is the Associate Director of the Lisa F. Brill Institute. She is passionate about the Melton way of learning and has loved teaching Melton curricula over the past four years. She received her M.A. in Islamic Studies and Diploma in Education from McGill University and a B.A. in Near Eastern and Judaic Studies from Brandeis University. She served on the Greenfield Hebrew Academy (GHA) and AJA Boards for over a decade, and in 2014 as Board President of GHA, she was involved in the creation of AJA. Judy is a native of New York. Judy has lived in Atlanta with her family and dog for 20+ years.

Dr. Shelley Buxbaum served as the Lisa F. Brill Institute for Jewish Learning director for eight years. She is a three-time graduate of the Jewish Theological Seminary of America; holding bachelor’s, master’s, and Ph.D. degrees. She also earned a bachelor’s degree from Columbia University and was a visiting scholar at the Hebrew University. Before coming to Atlanta, Shelley created the Department of Jewish Life and Learning at the JCC in Stamford, CT. She served on the faculty of the Park Avenue Synagogue in New York City, as Program Director at Temple Sholom in Greenwich, CT, and as Adult Education Director at the Commission for Jewish Education of the Palm Beaches.

Dr. Edward Queen is Director of the D. Abbott Turner Program in Ethics and Servant Leadership and Director of Pedagogy for the Emory Integrity Project. He received his B.A. from Birmingham-Southern College, his M.A. and Ph.D. degrees from the Divinity School of the University of Chicago, and his J.D. from the Indiana University School of Law- Indianapolis. Other professional positions include: serving as founding director of both the Religion and Philanthropy Project at the Indiana University Center on Philanthropy and the Islamic Society of North America’s Fellowship Program in Nonprofit Management and Governance. Queen has written, coauthored, and edited numerous books and received the Laura Jones Hardman Award for Excellence in Service to the Emory Community.

Rabbi Adam Starr has been the Rabbi and spiritual leader of the Young Israel of Toco Hills synagogue since 2008. Rabbi Starr grew up in Silver Spring, MD and studied at Yeshivat Shalavim in Israel for two years before receiving his bachelor’s degree from Yeshiva College. He has rabbinical ordination from the Rabbi Isaac Elchanan Rabbinical Seminary at Yeshiva University. Before coming to Atlanta, Rabbi Starr served as the Associate Rabbi at the Hebrew Institute of Riverdale for eight years. Rabbi Starr serves on the Executive Committee of the Rabbinical Council of America (RCA) and is the past president of the Atlanta Rabbinical Association. He also serves on the Atlanta Regional Beth Din for Conversion of the RCA. Rabbi Starr is a longstanding Melton instructor in New York and Atlanta. A native Atlantan, Judy is a professional studio potter. Her work is shown in numerous juried shows and galleries. In addition to her time at Ramah Darom, she teaches Clay Handbuilding to adults at the John C. Campbell Folk School in Murphy, North Carolina, and enjoys sharing her love of art with her students. At Ramah Darom, whether teaching drawing, painting, clay or fabric arts, she encourages creativity and individuality to seasoned artists as well as to beginners. Judy’s work can be found on her website and her Etsy store.

Guests attending a Ramah Darom Retreat must provide confirmation that they have read the Ramah Darom Immunization Policy and are up-to-date on all required vaccinations. Retreat registration forms will ask guests to certify that they, and all members of their immediate family attending a Retreat, meet all immunization requirements. We will not require guests to submit their medical records except in exceptional circumstances.

Note that not all states have the same requirements, but ALL vaccinations recommended by the ACIP are required at Ramah Darom Retreats.

Ramah Darom requires all attendees, staff and visitors who are eligible to be vaccinated against COVID-19 to complete full vaccination two weeks prior to the beginning of the program they are attending. This includes the Covid booster where indicated.

If you receive a positive COVID-19 test result in the days leading up to the retreat and are unable to attend, we are unfortunately not able to refund your payment due to upfront costs. Therefore, we highly recommend purchasing Trip Protection Insurance.

Please note that NO pets of any kind may join you for your stay onsite, for any length of time.

Ramah Darom is two hours from Atlanta, in Clayton, GA.